TO SCHEDULE AN APPOINTMENT

Gonorrhea is a sexually transmitted disease (STI) that can infect both men and women. It infect younger people more than older people.  Most of the cases of gonorrhea that are diagnosed every year happen to people between the ages of 15-29. It infects about 820,000 people every year.

The virus attacks the mucus membranes of the areas it’s introduced, and can cause infections in the genitals, rectum, and throat. It is a very common infection.

Up to 73% of Young People Who Have Gonorrhea Will Get Another STD in 12 Months or Less.

Gonorrhea weakens your body and makes you more susceptible to other STD’s including HIV.

Approximately 820,000 new gonococcal infections occur in the United States each year, and that less than half of these infections are detected.  This is because many people who have gonorrhea don’t know it. Especially in women, the disease often has no symptoms.

Because signs and symptoms can vary a great deal, the only way to know for sure if you have Gonorrhea is to get Tested.

How is Gonorrhea Transmitted?

A person of any age, sex, race, or sexual orientation can get infected with Gonorrhea.

Gonorrhea is transmitted via bodily fluids coming into contact with skin. Your partner doesn’t have to ejaculate to infect you.

Correct use of a condom will reduce the risk of contacting Gonorrhea, but it won’t eliminate it.

The surest way to avoid transmission of gonorrhea is to abstain from sexual contact, or to be in a long-term mutually monogamous relationship with a partner who has been tested and is known to be uninfected.

What are the Symptoms of Gonorrhea?

You can’t identify Gonorrhea from pictures because the symptoms are too different from person to person, and could be caused by too many other conditions.  The only way to be sure is to be tested.

If symptoms occur, they usually appear two to five days after infection, but can take as long as 30 days to appear.

Some men with gonorrhea may have no symptoms at all. However, men who do have symptoms, may have:

Rectal infections may either cause no symptoms or cause symptoms in both men and women that may include:

Gonorrhea infections can cause major complications for infants born to mothers with the virus.

If a pregnant woman has gonorrhea, she may give the infection to her baby as the baby passes through the birth canal during delivery. This can cause blindness, joint infection, or a life-threatening blood infection in the baby.

Treatment of gonorrhea as soon as it is detected in pregnant women will reduce the risk of these complications. Pregnant women should consult a health care provider for appropriate examination, testing, and treatment, as necessary.

Untreated gonorrhea can cause serious and permanent health problems in both women and men.

In women, gonorrhea can spread into the uterus or fallopian tubes and cause pelvic inflammatory disease (PID). 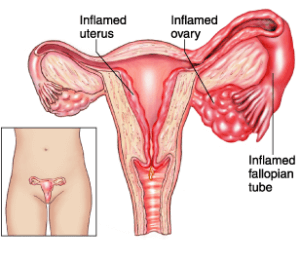 The symptoms may be quite mild or can be very severe and can include abdominal pain and fever. PID can lead to:

In men, gonorrhea can cause

If left untreated in both men and women, gonorrhea can also spread to your blood or joints. This condition can be life-threatening.

Is there a cure for Gonorrhea?

Yes!  Gonorrhea is a bacterial infection that can be cured with antibiotics.

Upon beginning antibiotics, the infection is usually cured in about 10 to 14 days. It is important that you take all of the medication your doctor prescribes to cure your infection. Medication for gonorrhea should not be shared with anyone. Although medication will stop the infection, it will not undo any permanent damage caused by the disease.

It is always a good idea to repeat the gonorrhea test in order to ensure the infection has in fact been cured.

How Do I Test for Gonorrhea?

The Nucleic Acid Amplification Test (NAAT) is a simple urine test used to detect the gonorrhea bacterium. The urine test has been proven to be more accurate than the swab, which requires a pelvic exam for women and a urethral swab for men. The urine test is also painless and non-invasive, unlike the swab.

First morning urine is recommended for this test, but the specimen is acceptable if the patient has not urinated for at least 1½ to 2 hours before it is collected. It is very important that first void urine (the first part of the urine stream) be collected for the specimen.

It is recommended that the test be taken at least 5 to 7 days after a contact of concern, although many individuals with gonorrhea will have positive results within 3 or 4 days of infection.

Private Testing Center offers affordable and convenient testing, in a constant effort to prevent the spread of Gonorrhea, HIV and other STDs.

Our primary goal is to to educate people about the risks associated with unprotected sexual activity and also the importance routine screenings play in prevention and treatment of Gonorrhea, HIV and STDs.

Our counselors are the most knowledgeable, honest and ethical in the industry.  Feel confident knowing that you can speak freely to our counselors about any situation or issue. You will never be judged by anyone at Private Testing Center.  We will always make sure the right testing is being done at the right time. With Private Testing Center, you can feel confident knowing that your test results will not only be fast, but accurate as well.

We understand your privacy is of the utmost importance and we assure confidentiality for every one of our customers.

Is there a cure for gonorrhea?

Yes. Gonorrhea is easily cured with antibiotics, and if caught early, it is usually cured with a single dose. If untreated, gonorrhea can cause serious health issues in both men and women.

Should I repeat testing after I have taken my full dose of antibiotics just to be sure I’m cured?

It is a good idea to take a second test after the antibiotics have been taken entirely. If for any reason the bacterium remains in the body after treatment, you will be susceptible to the damage it can do and you can also transmit gonorrhea to others.

If I am positive for gonorrhea, does my partner need to be tested?

After I’m treated for gonorrhea and it is cured, can I get it again?

Yes. Being treated for gonorrhea doesn’t give you immunity to it. You can always be re infected with gonorrhea if you are exposed again.